Gadget said:
Is it just me, or are mil-sim markers really poorly suited for paintball?

You'd think that basing a gun design on a real-steel equivalent would be a good idea, but soldiers don't wear bulky masks, real firearms need the stock level with the barrel to cope with the recoil from an explosive round and bullets have enough accuracy to make use of proper scopes/sights.

We on the other hand, do wear goggles/masks, that make it next to impossible to rest your cheek on a stock and sight along the top of the gun, shoot guns with minimal recoil to absorb so can get away with a stock/tank fixed at any point and shoot ammunition that varies in shape so greatly as to make sights more of an inconvenience than asset.

It seems to me that anything with a stock that's in line with the barrel is unnecessarily putting form over function and forces you to twist your neck to try and sight along the gun. A 'normal' paintball gun layout of bottle/stock coming off an ASA at the bottom of the grip frame seems a far better layout, as when shouldering the bottle it automatically brings the body/barrel of the gun into your eyeline.
Click to expand...

completely agree with the points mentioned, i tried to do this with an emc kit on my geo 3, bought a fancy offset rail, a scope, a laser, foregrip etc but all wholly unpractical once the goggles are on. (check profile pic) but they do look cool, especially milsig. I wouldn't buy one though, but certainly one of the best looking milsim markers out there (but screw playing magfed with other people using tourny markers!)

TRA Headshot said:
I'm going to see how I get on for a while before I bother with a scope, I am more of an "in ya face" player so not much use for a scope :-/
Click to expand...

Telescopic sights:
If you want to look further then you can see then you need to get closer to the game, but if you are already in the game then you are going to get taken out because you have just restricted your wider view and your perception of distance

If you want to see where your paint is going and want to hit the target first time then you will still have issues. Paint has a limited range, even I can see where my paint is going without my glasses and correct my aim. Paint does not fire perfectly straight and consistently

Non telescopic sights, red dots etc
If using the sight correctly (and training your eyes and brain to do so) then you don't need the red dot
Hold a marker in front of your face, feed neck/hopper in front of your eyes (depending on your preferred firing position) focus on your target and you get X-ray vision
(Provided you don't have the hopper up close obstructing both eyes)
Even better - hold your marker with the barrel like directly between your eyes, see through the bolt and barrel and adjust for height

The exception for this is total fine tuning, barrel matching, perfect paint/first strike and investing a lot of time and money firing shot after shot at various ranges, use a crossbow sight and an adjustable riser
Our man Adam has a saying - 'if I can see it I can hit it'. He is right, but he puts in the practice, at range he may take a couple of shots, but with a dam and first strike he was taking numerous one shot eliminations at paintfest

I've played paintball with magfed markers (well pistols) now for three years and intend on buying my first "full size" tournament style marker this year. What I would love to see as magfed grows is more Tournament marker makers get in on the scene. Now I don't mean AR/M16 style rifles, I mean proper magfed paintball markers. My plan for my new marker is to fit it with a spring feed for limited paint games so it will look a little like this.. 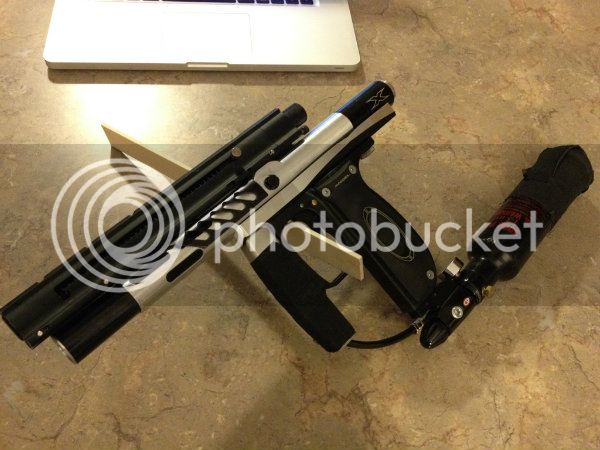 Though I'll probably use it for scenario games too. Its just a shame it won't be as nice as the one in this picture. 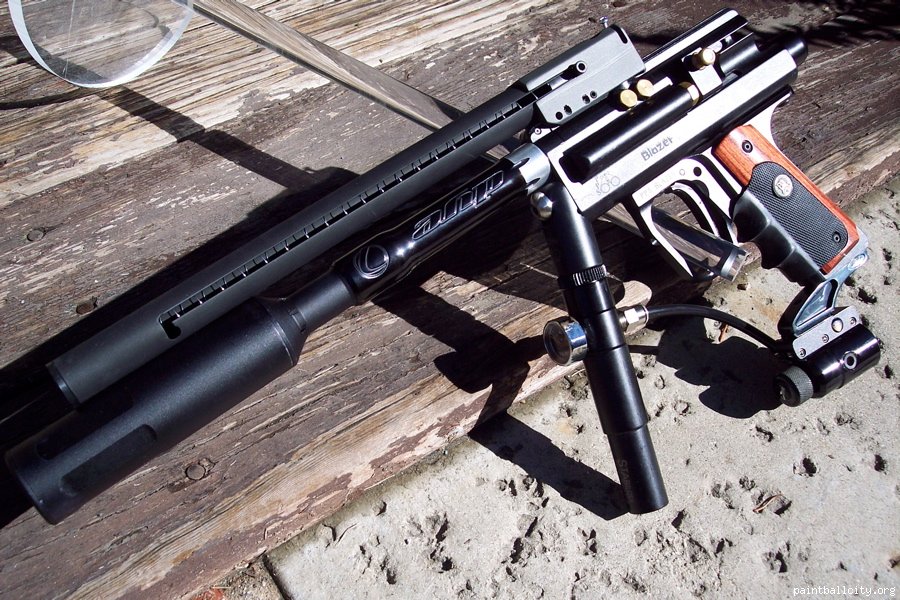 Ok so the last one is a stretch..
B

100% agree with the first post, having started off using milsim markers, they are deffos poorly suited, not to mention all the previous covered points, about scopes, lasers, stocks etc etc being unnecessary/no use at all, the markers themselves are just a huge target and have far to large a profile to be any use, when you can just whip a little tourney marker thru a tiny gap and get some shots off, then theres the air consumption compared to egos, eteks etc etc
G

real looking paintball guns are a joke,,,if your wearing a mask..lose the stock and get behind your marker..
in the real world of firearms there are guns designed for use with a gas mask.. they have a kick up stock..just like my markers that i make... you know why.. as i designed them..and they are now the hottest must have in the real world of firearms..
< catch up lads >

using a mask and a stock gives you parralux error... this means that where your aiming is not where the shots will hit,,,
you can play milsim with a marker that looks like a real gun designed for use with a gas mask.. but you dont..
you could add a kickup asa mount to your marker,,and get behind the marker ..but you dont...millsim is not really about paintball..its more about dressing up and playing soldiers,,, which is fine,,,but know that the markers that you are using
well most of them are truly pants...a lot of them are still running blowback bolts..my god...come on its 2013 not 1989..

. there are a few that are truly clever..i like the new defendor from empire..< i wonder where they got that idea > can you use this in milsim..
and i like the dye dam.. but most of the other stuff that is out there is just a toy...

it only takes one of these m16 type guns or black guns to end up in the wrong hands and you can kiss paintball goodbye lads,,,

mag feed yes.. real looking no....or have we all forgotten about the VCR bill..

mag feed ,,it dont need to look real just to use a magazine,,,to prove a point what about that twat on youtube running round shooting members of the public with his tippman x7,, yes hes only using air...

but if the cops had shot him down...then the next day...paintball would be history...

practical..is far better than tactical....just wish you guys could see it...and allso how much danger real looking markers bring to our sport..and its future...

and just to add,,yes i have been in the mob..and worked for them...and yes i have also worked for some major firearm companys...and the only thing that dictates what a gun should look like is the bullet it fires and the cartridge it loads,,

trust me,,,in the real world if there was a real gun that we could just pour ammo into and hold 150 rounds at the same time,,every one would have one... there would be no magazines...

Gadget said:
You've hit the nail on the head there mate - I'd love to buy a non milsim magfed marker - but no-one makes one! Hammer 7 is probably the closest, but I don't like playing pump.
Click to expand...

oi! what about my side feeds,,, tac caps have allways been allowed at mag fed games... but you have to cut your tac cap down...
G

Clint2u said:
Easiest way i got over the whole resting your cheek was buying a riser so that the scope was higher up and unaffected by wearing a mask?
Click to expand...

you need to think more...the reason for the high sight on this type of weapon is to make the recoil travel back,,not up...
G

truly a work of art,,,, so thats it,, im off to the workshop over xmas... to rework one of my mech ions,,
i have a ten shot tube like the one above,,,but,,i will use a different way to load that ten shot tube..

or..its going sten gun style with a simple ten shot tube in the side set up at a slight angle... i have allways loved small markers,,,and with more and more urban games popping up....

but i think i will stick to me peanut bottle,,,if i have a fast reload system..even if its still only a ten shot tube,,,
i can still put paint out at a faster rate,,, and that right there is a edge...

the best idea is to have a system where you can change parts..so you can have hopper feed or ten shot feed...but with out
a ten shot tube just sitting out the top,, not thats theres any thing wrong with that,, lets face it.
its probley one of the best ways to shoot a ten shot tube,,and its super fast and easy to reload..

so off to the drawing board...

pfffft Gomstar, dont dare ask the magfed comminuty if you can use a 10round tube . . they go bloody mental and get all agro.

I wanted to use a pump with stick feed . . NO. They want to play soldiers and they only want a certain way of loading those 10 shots to be used, even though it would be the same game of paintball.