The 11th season of the South's favourite tournament series, the NSPL, has come to its dramatic end.

All the scores have been calculated and the season rankings finalised... 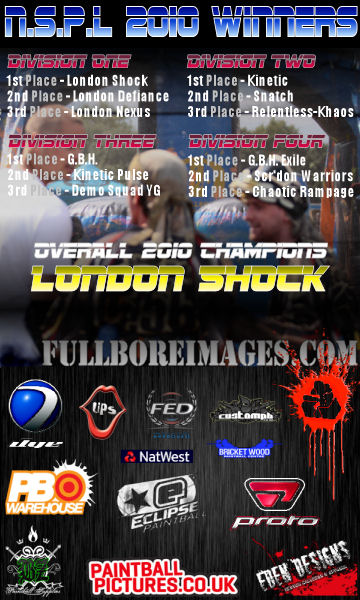 The full rankings can be found at http://www.nspl.co.uk/rankings.php

What a nail-biting finish! All of the league's four divisions have been hugely competitive this year with the final placing literally being decided in every gruelling point across this year's six tournament events. Congratulations to all of those teams placing in the top three of each division - that's an acheivement to be proud of.

The NSPL will be holding a presentation evening on December 4th at Bricketwood to award the NSPL Shields to the top teams - more details on this to follow.

Remember, the Federation Cup is the National Final on September 18th & 19th, seeing teams from the two sanctioned tournament series', the NSPL and CPPS, coming together to battle it out for UK bragging rights and a huge prize fund that is generated in part by the support of all of the NSPL teams. Get yourselves booked in by contacting the UKPSF or myself and let's see a healthy representation of NSPL teams at the Cup to ensure the South proves once and for all that we have the best paintballers in the Nation. I can't stress how important this is to the future development and success of our sport - a proper National Championships is something we have been missing for some time - be sure to lend your support and enjoy a fantastic end-of-season event to boot.

My sincere thanks to everyone who has supported the NSPL again in 2010. Despite everyone struggling in the current climate, we have soldiered on and enjoyed another great year of tournaments in the South of the UK. It has been an absolute blast. We are now looking toward 2011 as a year of recovery and growth, and will be doing our utmost to ensure the NSPL has its best season yet.

Stay tuned and thanks once again to every player who has competed this season.

In addition, special thanks go out to all of the league's supporters, sponsors, staff, venues and refs. Extra special thanks to Reading Entity, Yorkie from Bricketwood Training Centre, Neil Ireland from UCZ Paintball Park and the NA Angels, and all the team captains whos continued passion and commitment keeps this sport alive.

Much love to you all.
Reactions: Cool3108, cowface and James ECI

Has been a great season, thanks alot Syd! Looking forward to the FED Cup now !!

Congratulations to all the winners in the NSPL this year.

Big thanks to Syd for the organisation this year. Divison 2 was so competitive all year and has been great to be a part of. The race to 2 format has been a great success in my opinion and great value for money.

Also big to all the marshalls (Reading Entity) who i thought did a really good job all year. Few if any complaints from Team Kinetic about the marshalling all year. Really has been spot on! Oh and thanks to Entity for a few scrims at UCZ this year and good taste of X ball at Syds birthday bash.

Lastly big thanks to all the teams who made up Division 2 this year. Great competition and sportmanship all round. Special mention for Snatch as the rivalry and competition has been intense all year, couldnt have been much closer, some great battles.

Congratulations to all my team mates on Team Kinetic. Been a fantastic squad to be a part of this year and Division 2 champions and Division 3 runners up are great results that the whole squad are very proud of.

Bring on the Federation Cup and watch this space for 2011 i know there alot of big decisions for the Kinetic squad to make before next season!