Have got a drilled noid block aswell.

Then was looking on tinternet. Came across pooty low pressure bolt can. I had a spare can so decided to cut it up and make one. Which I have done. Then after that realised that the front oring wasn't needed and could get the air flowing straight into chamber if I cut away the front oring groove. So am now left with this. 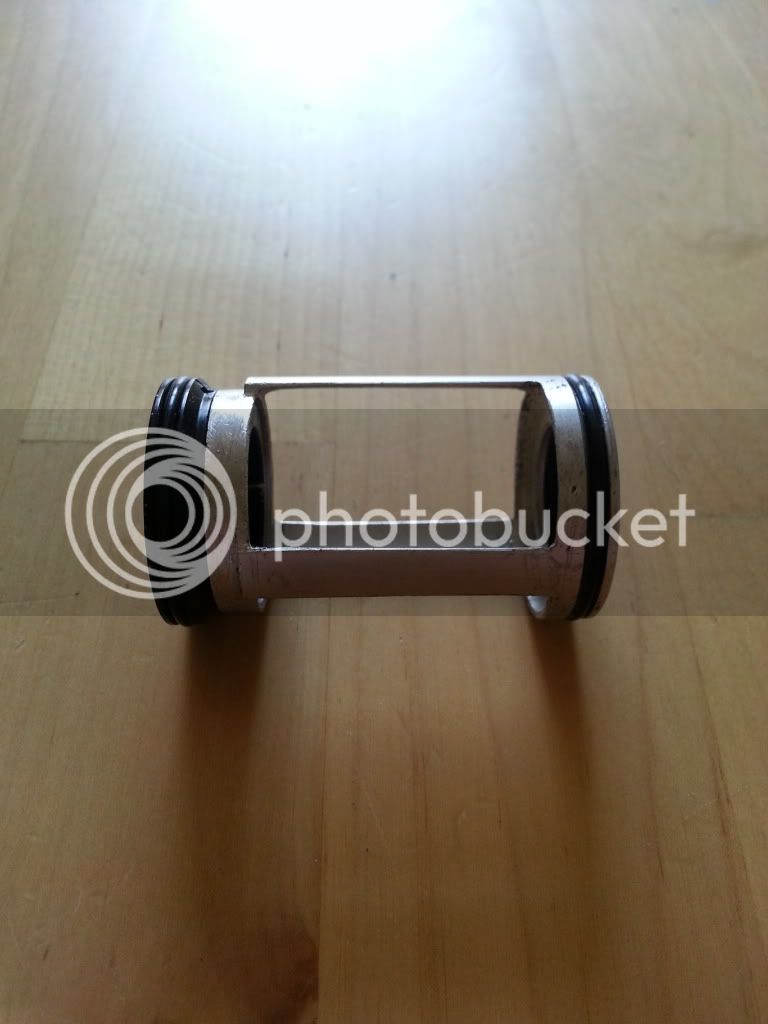 Then I found a front can which is all one piece. And have done the same to that.

I have tested the first can i modded. This is where it gets interesting.

According to manual shocker pressure should be 180 - 220 psi and dwell according to instructions for board is 14 ms.

if I drop pressure to say 140 psi and remove filter and adjust velocity with dwell. Would I do damage as it is already running at a lot lower pressure.

Also has anyone got a spare filter rod. As don't fancy doing it if it won't work.

Thanks for any help with this

they're also there to filter out any particles from the air before it gets to the noid, any place with good quality fill stations would be fine, but a dirty fill could cause in theory some damage/ accelerated wear and tear

Thanks for info spangley. Eigen bolt has no kick. Marker is really smooth now. Also I'm getting about a hopper and 5 pots out of a 3k. I have only really put two cases of paint through it but am really impressed with it so far. With sl3 reg it is shooting spot on even down to last 200psi in bottle. And what I have put over crono seems to be within + or - 2fps.

Man I spent years pissing about with shockers trying to get a perfect gun that was tournament reliable with no kick and had a good board that didn't bounce...found out after about 6 years that the best thing you can do with shockers is throw them in the bin.

Personally I dont think i'd bother to remover the filter from the noid insert, it would I imagine, improve/speed up recharge but dont see it making a major difference.

Also, I'm sure you're aware, but worth noting that your lp cans you've made wont work on most shockers, as they usually have cut outs in the body in that area, fine on your ton ton though.
Last edited: Apr 7, 2013

Yes I know about can not suitable for most shockers.

I recon It will be about 1400 out of 4.5k fill. Only way I can see getting close to 1800 would be with an adjustable bolt guide and turn mechanical dwell down. Might have to look into that over next couple of weeks.
Last edited: Apr 7, 2013
Reactions: cheyenne

Mick's shocker is pretty darn spinky. He let me touch her
Love the little puff of air in my face too refreshing

Regarding the filter, Spangley covered that, entirely optional but a dirty fill could cause you some problems, it's an assumes risk.

Thats how I've set my gun up every time and it's never steered me wrong
Reactions: cheyenne and tricky m

Thanks for info. Will try that when get some air. What mods have you done?

Am going to leave filter alone. Was just wondering.